Yesterday, May 31, during the trial of Keith Alan Raniere, AKA Vanguard, AKA Master, AKA Grand Master, [AKA Supreme Master, AKA Prisoner Number 57-17705], the landlord of Kathy Russell was called.

We learned a lot about Kathy Russell, 62, during this trial and she is more and more looking like she had a role in Nxivm that may have been more juicy than what was previously imagined by outsiders.

Kathy was the one who helped Dani [the Mexican woman who was confined to a room for nearly two years] illegally get across the border from Canada to the US, providing her with fake ID and for which Kathy pleaded guilty – her sole crime in a plea deal whereby she faces a likely prison sentence of between 6-12 months.

We also learned from Dani and Lauren Salzman that Kathy was involved in threesomes with them and Keith.  In one steamy episode Kathy and Keith were making out hot and heavily in front of Dani, who was trying to ignore them.

Finally Keith and Kathy inveigled Dani to join them in their manege a trois even using a bit of classic guilt-tripping by reminding Dani that it was Kathy who helped get her over the border whereby she was here in the first place.  Dani succumbed, but testified she did not enjoy it.

Kathy – who we have previously reported is an erstwhile ballerina despite her age – seems to be the super freak – next to Vanguard of course – of Nxivm.

In the trial of Raniere, Kathy’s landlady was called to the stand and for what reason time shall no doubt disclose.  The gist of her landlady, Sheila Jelonek’s  testimony was that Kathy rented the apartment from her under a fake name – Kathleen O’Sullivan – and that she paid in cash once yearly.

Kathy told her landlady that she was a rich widow and wanted to pay in advance. The rent was about $900 per month which means Kathy plunked down some $11,000 in cash – which Jelonek testified Kathy brought in a paper bag.

Kathy rented the apartment for years in this fashion and it came out that Nxivm’s other candidate for super freak, Daniella Padilla [the DOS first line slave who bought the cage, paddles and other sex toys online for DOS] also used the apartment at least once.

The landlady encountered Padilla in the apartment and Padilla [who is not the same Daniela that testified] told Kathy’s landlady that she was housesitting for Kathy.

After renting the apartment for years – and paying annually in cash, [she met the landlady at Starbucks annually] in 2018, subsequent to Keith Alan Raniere’s arrest [on March 26, 2018] Kathy Russell [known to her landlady as Kathleen O’Sullivan] failed to return her landlady’s multiple calls seeking to learn whether Kathy was going to renew her lease.

Her landlady finally entered the apartment and took a video [which was shown in court] which revealed that Kathy had light-blocking black drapes and blinds – so little or no light would enter and there was a tripod for a camera there.  The tripod was set up next to a bed. 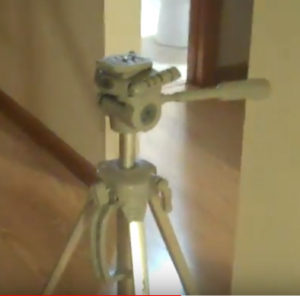 This has led some to speculate that “collateral” [i.e. blackmail] photos of DOS women may have been taken there. Or photos of threesomes featuring the lordly one, Keith Alan, himself.

There was some question about whether Kathy actually lived in the apartment or whether it was used for other purposes – perhaps a sex lair.

What captured the attention of some spectators in court and possibly jurors too was that the video revealed a colorful display of alphabet magnets on Kathy’s refrigerator.

The magnets themselves were not only colorful and pleasantly designed and arrayed, but creative Kathy [or Dani or someone] spelled out a number of interesting and intriguing words, Nxivm concepts no doubt -which, happily, Frank Report is prepared to show our more attentive readers.

Before we get to Kathy’s lovely refrigerator magnet display – the landlady’s video also showed a picture of Kathy’s beloved leader, the ethicist, Keith Alan Raniere, pinned to a bulletin board. 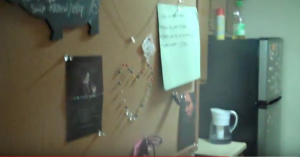 The landlady, who took the video, testified that she was surprised to find what she called ”juvenile” words on the fridge.

Was it juvenile or was there a deeper Raniere teaching? You be the judge:

Here are some of the colorfully displayed words and concepts on the fridge: 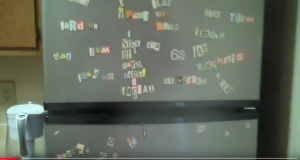 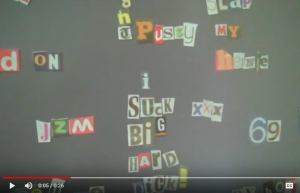 What was not on the fridge was a concept that encapsulates all of the ideas on Russell’s refrigerator – a simple notion that speaks volumes to all followers of the Vanguard worldwide: 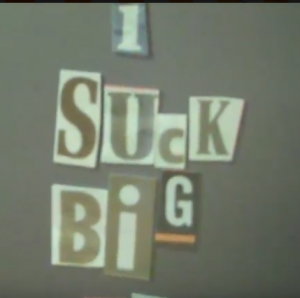