Editor’s Note: Our correspondent, Fred is back, [see his last story] offering more details on the curious claims of J.Z. Knight [AKA Judy Zebra Knight, AKA Judith Darlene Hampton] who says she channels a 35,000-year-old Viking entity [ghost] named Ramtha.

Knight has a following, largely because she claims Ramtha speaks through her and he has much wisdom to impart to her followers – many of whom pay substantial sums of money for the privilege of learning what Ramtha has to teach.

As far as I can ascertain, there are several possibilities for what is really going on. That alone makes this a wonderful topic for investigation.

Here are some of the possibilities. Perhaps there are more:

1 Knight leads a potentially dangerous cult, whose followers will do wild, self-destructive and possibly violent things if Knight [pretending to be Ramtha] orders or suggests it.

2 Knight is a relatively harmless fraud. She leads a cult [if you can even call it that] followed by fools. If idiots want to believe in her phony Ramtha spiel and spend their money, it doesn’t matter. They aren’t going to hurt anyone. The advice and prescriptions “Ramtha” gives to her followers are not harmful. It’s all just harmless nonsense.

3 Knight is a con artist, who achieved wealth by decades of lying to followers eager to believe in her Ramtha story. But it’s all an act to get money and live a lavish lifestyle. She is committing criminal fraud. While the risk of violence is low to nil, she is still fleecing gullible people. However, she does not force anyone to join or stay in her cult. The folks who pay her and believe her phony act can, for the most part, afford it.

4  Knight knows there is no Ramtha, of course, but she has a noble purpose for pretending to channel this fictional ghostly being. By using her fiction, Knight can teach higher spiritual teachings, which people would otherwise not believe. This is somewhat akin to fables and myths in religion, the “Unless you see signs and miracles you will not believe” in the New Testament. To Knight, the use of the fictional Ramtha is worthwhile, as “the end justifies the means.” Knight teaches what she believes is highly advanced spiritual knowledge in the name of Ramtha [The Theosophists did something quite similar]. In the end, Knight’s followers are helped to obtain higher states of consciousness.

5 Knight is actually delusional and insane. She really believes that this spirit of Ramtha periodically inhabits her body and speaks through her and the things she speaks as Ramtha – a product of her subconscious mind – she sincerely thinks are from Ramtha and will truly help people.

6 Knight actually does channel this wonderful old soul, Ramtha, who is what he says [through Knight] he is. He was once a Viking warrior, etc. – and is filled with great wisdom for those wise enough to learn.

Knight’s Ghost Is a Liar

7 Knight actually channels some other ghostly spirit who is pretending to be Ramtha. In other words, Knight is not the charlatan, the ghost she channels is the charlatan. After all, if there are ghosts and they can inhabit people’s bodies and speak through them, who’s to say they are who they say they are. Can a ghost not lie? There are no ID papers. There is also no archaeological or historical evidence to support the times and the events Ramtha describes as having happened – some 35,000 years ago. Indeed, there is no independent record of the existence of Ramtha. The ghost inhabiting Knight’s body might be a murderer or a suicide or some buffoon creating the fictional identity of Ramtha for fun or devious pleasure. I could well imagine the ghost of Keith Raniere coming back and inhabiting some [slender] women’s body and claiming he was Jesus or Buddha or some wonderful Avatar.

In short, Frank Report is investigating J. Z. Knight and her the Ramtha School of Enlightenment simply because this is something that has a chance at being proven – one way or another.

More on this later.

In the meantime, our correspondent, Fred’s view is that J. Z. Knight is a fraud, not because Fred believes channeling is bogus, but because he thinks Knight is a deliberate liar and a fraud.

She contrived Ramtha, he says, imitating, in large part, the late Jane Roberts who claims she channeled an entity named Seth. Fred believes Roberts truly did channel this entity, Seth. Hence, he compares the two, Roberts and Knight:  Without concerning ourselves too much about whether Roberts was legitimate or not [she’s deceased], Fred brings out more curious facts on Knight. And that alone makes his report worth reading.

Jane Roberts would sometimes take a sip of beer, or occasionally get up and light a cigarette, while in trance. Every single detail of these events was recorded by her husband in the dictation, so you can see the whole process in the context of what she’s channeling. She does not stagger around blind drunk.

You can see when Seth is dealing with particularly difficult material and high concepts, and the delivery slows down. Time details are recorded throughout the transcript, and you can see exactly why some passages take longer to deliver than others.

But when you say that you’re not sure why I make a distinction between these two “channelers”, I really draw your attention to the beginning of my piece. Jane Roberts and “Seth” are sometimes credited as marking the beginning of the whole modern “New Age” era.

Seth channeled on TV, for example, a real first. I’ve read a couple of accounts from really early Ramtha followers, who say that the whole Ramtha phenomenon right from the beginning was clearly based on Seth.

One of J. Z. Knight’s bodyguards, who was with her 24/7, said she has a phenomenal memory. He would see a book on her bed with passages marked, and weeks later, Ramtha would deliver those exact words verbatim from the stage. He was asked in the interview whether in the 18 months he was close up, he saw one thing that he thought was genuine. He said no.

Again, those early followers say that Knight literally “channeled” whole passages from Seth, word for word, in the beginning. Seth, however, has a deep and complex biography, many lives on this earth, including one as a minor Pope of whom you will never have heard, the histories from that era are largely fiction, he says. He gives vivid descriptions of these lives, including his habit of sniffing oregano to get high when he was a spice merchant in Denmark centuries ago.

J.Z. Knight simplified the whole Ramtha back story to one single incarnation in a prehistorical era of which there is absolutely no evidence. Very convenient. And even with just this one incarnation, there is no convincing detail, nothing you can check even for consistency.

Since those early days, J.Z. Knight has enthusiastically embraced every conspiracy theory and fad going, from quantum physics to reptilian overlords from Nibiru to chemtrails to the Black Pope to blue light therapy to QAnon.

But Knight’s foundation comes from imitating Jane Roberts, and I wanted to make this clear. Go and read Seth Speaks for yourself, it’s available online:
http://borladin.tripod.com/sethspeaks/seth.html

Tell me this is not a coherent and internally self-consistent work. In fact, it contains the very best exposition of the so-called “Many Worlds” theory of quantum physics I’ve ever seen. Yet it does not use the word “quantum” once. It only talks about probable realities, and how they are all simultaneously alive and present. And how you navigate the incredible complexities of this omniverse, as a conscious multidimensional being. To describe this as “spurious phenomena of the mind” just proves that you have not really examined the material. 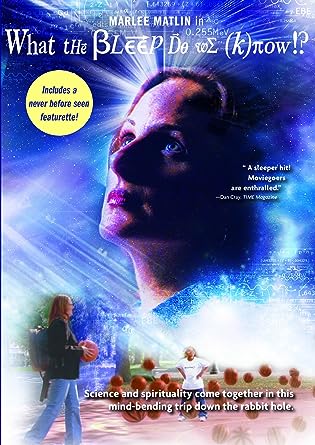 Compare this book with the mind-numbing rubbish of the Ramtha movie, “What The Bleep,” which purports to be about quantum physics. The Ramtha whistle-blower David McCarthy says he worked on this movie, before he began to see through the whole Ramtha fraud. He was disgusted to see how the movie twisted and misrepresented the words of the real scientists interviewed, and noted how they unanimously dissociated themselves from the movie and disagreed with the way their words had been abused.

McCarthy was called by the movie’s producer to help with a sequel. He asked about the misrepresentation of the scientists’ words, and said the physics was all rubbish. The producer said she knew this, but: “Oh, it makes people think.” So they themselves know this material is nonsense. But it sounds trendy and draws in a certain type of gullible seeker.

Don’t forget, also, that the one direct connection between Ramtha and NXIVM is Mark Vicente, co-director of What The Bleep. Anyone involved in the creation of that film is a devious manipulator, the whole movie was deceptive nonsense. [Editor’s Note: Mark Vicente has defected from Nxivm and was a major reason why the Nxivm cult was taken down].

Again, this is why I draw the comparison with Seth: take a look at the real thing, and you will find real wisdom and insight, and some truly amazing quantum mechanics. I’ve hacked through as much Ramtha School of Enlightenment [RSE] material as I can bear, including their famous White Book, and I literally cannot find one single thing of the slightest value in any of it, not even a decent aphorism.

J.Z. Knight wanted to copyright the saying “So Be It”, for crying out loud. It’s all commercialized, it’s all commoditized, it’s all designed to keep you spending and dependent. And if you spend enough, you rise in the hierarchy, and get to spend more time with Ramtha, and maybe get closer to the hanky-panky that is said to go on after those wine ceremonies.

The thing about a true fraud, is that there needs to be a reality that it’s pretending to be. You don’t fake a three-dollar bill. You may think all this spiritual stuff is hogwash, that’s your right. But it’s a bad mistake to lump it all together.

Jane Roberts describes the lengthy and painstaking process by which she came to accept and participate in the channeling process. She was a highly gifted writer and poet in her own right, so her insights are very well considered and comprehensive. She satisfied herself that this material was genuine and worthwhile, and you can examine her standards and methods for saying this. She convinced me of her own sincerity, if nothing else.

Ramtha appears to J.Z. Knight in her kitchen, and she says “You’re so beautiful!” — and that’s it, Ramtha the Enlightened One is now in her life.