Dani’s Incredible, Horrifying, Emotional Story of Being Confined in a Room for Two Years

Dani’s testimony on May 29, finally veered to her confinement in a room. It was late in the day.

Dani testified that after she went to meet Keith to apologize to him, and failed to apologize, it was now clear to Keith that she was in desperate need of punishment.  He wanted her to go into a room and heal her ethical breach.  She was to have a paper and pen and nothing else.

“If you don’t do that, and you go back to Mexico,” Keith told her, “you will lose your family.”

She wanted to know how long she would have to go into the room. She was told “as long as it takes.”

At this point, Daniela is getting more emotional on the stand than we have seen her before. She’s always been very rational. But now she’s getting emotional.

Daniela did not want to go in the room. But then that night, she got out of the house [she could not leave the house without permission].  She got out and called Ben Myers from a payphone.  She wanted him to get her out of there, but Ben did not pick up the phone.

The next day Dani realized she had no choice. Dani kept trying to convince everyone that it was not necessary that she be confined to her room. But nobody listened. So she was ordered by Keith – with the full support of her parents – to be confined to a second floor bedroom at her parent’s home at 12 Wilton [In Knox Woods – a few blocks from Keith’s home on Flintlock and his sex lair at 8 Hale].

Dani was asked by Moira Penza about the room. She said it was a room with four walls. A door to the downstairs, a door to the bathroom, a foam mattress and windows that were papered up so she couldn’t see outside. Nothing else in the room.

The clothes on her back were the only clothes she had. She had to wash the clothes in the adjoining bathroom.

Sometimes there was whole months when she would see nobody, no other living person.

Only Lauren Salzman was allowed to visit.  Lauren was assigned to be the person to come and check on her. And Dani said three months went by where she didn’t see anybody.

Dani did get three meals a day. The meals were brought to her [prepared by her family]. They put the meals on a plate outside her room. They would knock on the door then leave. She didn’t see anybody.

In her lonely room, she would put her ear up against the door to try to catch the sound of voices, just to hear something.

Sometimes the meals were late. Dani, with nothing else to do all day, became food obsessed. She spent her time wondering what the next meal would be, waiting for the next meal.  She would have incredible joy or deep disappointment based on whether the meal met her expectations. She spent hours dreaming about what her next meal might be.

She was going crazy. She had nothing to do but stay in a room and write on her paper.

Dani said in court, “I think I went crazy.”

Moira Penza asked, “What was your state of mind?”

Dani started describing it: She lost perception of things. She became numb. She started making routines so she wouldn’t go crazy. She would look at the shampoo or a package of food that had writing on it, because she needed to see the words. In her head, she would imagine going outside and tried to think about every detail of going outside. Sometimes she would just lose it. When she lost control of herself, she started laying on the floor and scratching her arms. She wanting to scream but she wasn’t allowed to.

There were a lot of hours in the day. And at this time she hated Lauren, Lauren, who didn’t come to see her. She hated her. Lauren was mean to her and she hated her more and more. But when Lauren finally did come, the lonely girl had such an intense feeling that she loved her, and again and again she asked, she begged Lauren to be able to leave.

But Keith would not allow it. She had not yet healed her ethical breach.

In her room, alone, Dani took down the paper from the window and looked out.  She would watch the rabbits and birds – it was her only entertainment. That and creeping up against the door, straining to hear the sounds of her family speaking.

She wanted out. She had her paper and pen. She was trying to find “the right combination of words to fix this ethical breach.” She wrote love letters to Keith. Nothing worked.

At one point, Dani decided to cut her own hair. She wasn’t allowed to do that. Keith had told her to never cut her hair. He liked it long, but she did it anyway. In her room. This was something Dani could control. She could cut her own hair.

On Lauren’s next visit, this was a major problem. This hair cutting in and of itself was another huge ethical breach. Lauren told her now that she was farther away than ever from leaving the room.

The only way to fix this huge ethical breach of her cutting her own hair, was to stay in the room till her hair grew back to where it was.  Dani was crestfallen. She thought about how many years it took her to grow her hair that long. It was going to take years for her hair to grow back, more years in the room.

All through it, the monsters, Lauren and Keith, kept telling her that she is not healing her breach. They told Dani [through Lauren] that she was supposed to want to be in the room, to want to be confined to heal her breaches.

That’s why Dani wrote, she testified, a note that she wanted to be in the room.

While Dani testified that she was alone, that she felt she was going crazy, she felt impotent. Nothing made any sense to her – during this testimony, Keith was looking at Daniella, emotionless.

One day, when Dani was straining to hear talk downstairs, she heard them discuss installing a camera to monitor her. Then another day, when Daniela knew nobody was home, she sneaked out of her room and  stepped out of the front door to walk around, but he came back before anybody returned.

Another time she sneaked out and stole a couple of books and brought them to her room.  She read them over and over again. But she eventually confessed to that. Another huge breach.

As she is testifying to this, Dani is getting more emotional. Then one fateful day, she went downstairs and managed to access her email account. She had been in the room for well over a year.

She checked her email account and except for a year-old birthday message from Ben, nobody wrote to her. Not in an entire year. She felt like nobody wrote to her. Nobody missed her. She was gone from the world and nobody noticed. She cried in her room for days and days. It became harder and harder. She was listening only to her own voices; she was losing her sense of herself.

Dani testified, trying to maintain her composure – amid a courtroom deeply affected. Some were holding back tears, some were silently crying for her.

Dani said, in these circumstance she was, she knew, becoming crazy, she was losing control of her mind.

Penza asked, “How would you describe how that felt?”

Dani paused. Then she said “It’s hard to explain. Like nothing makes sense. Nothing. There was a nothingness.”  She said she was second guessing all her thoughts. She had the awareness that “nobody cares about me.” She was a monster. “My mother didn’t come.” Her thoughts were “somebody come get me out.”  This is where she’s crying and sobbing, when she said. “Somebody come get me.”

Keith was looking at her when she said this. While the entire courtroom was sympathetic, some in tears or nearly in tears, how did the monster react? Did he have any reaction?  There was no reaction. He just stared at her.  He turned for a moment to look at the spectators, dispassionately, then turned back to stare at Dani.

One day, Dani made a decision. There was a specific moment. It was a day like all her other days, but this day she made the decision that she wanted to end her life. She looked out the window and saw a red bird. She had seen this bird from her window and the bird left and then it returned. When Dani saw the bird return, something changed. Now she wanted to live. She had a sense of freedom. She wanted to live like everybody else. She didn’t care about her family anymore.

“All I wanted to do was live,” she said.

She wanted to tell Keith. She left the room. She walked out of the house and walked over to where Keith and the others were playing volleyball. 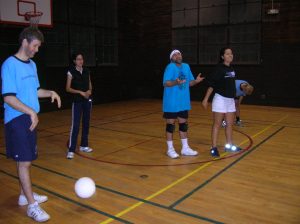 She arrived and the look on everybody’s face was astonishment. It was as if a grave had opened. When Keith saw her, the coward ran and hid. He hid from her.

A group of Nxivm members seeing his fear rushed to grab Dani and escorted her outside.

79 commentsOn Dani’s Incredible, Horrifying, Emotional Story of Being Confined in a Room for Two Years