It’s only the beginning.

There is more to come, with additional prosecutions of Nxivm players likely.

In the meantime, permit me to say that, if Keith Raniere was an appetizer, Clare Webb Bronfman will be the entree. She is not only guilty of numerous crimes for which she can [and likely will] spend many years in federal prison, but she has some $200 million to seize – to be carved up between the FBI, Homeland Security, IRS, DOJ (EDNY & NDNY) and perhaps there will be some left for her victims.

Now, that the trial is complete – and Keith Alan Raniere is on ice for years to come – the investigation and prosecution of the rest of the Nxivm gang of criminals will get started in earnest.

I will be reporting it all in advance of the rest of the media – as I have done right along.

Still, yesterday was a whale of a day. The sea monster was harpooned, and everyone, I think, was a little taken aback, when the jury came back so quickly.

On June 19, the jury found sex-slaver Keith Alan Raniere guilty on all counts, including, significantly, sex-trafficking, which comes with a minimum 15 years’ federal prison sentence. This means he will be housed in a maximum security facility. [A sentence of more than 10 years requires a prisoner to be lodged in a maximum security federal prison.]

Ironically, yesterday’s date, June 19th, the date it became official that Raniere would lose his freedom, is Juneteenth, or Freedom Day.

Juneteenth commemorates that, on June 19, 1865, slavery was abolished in Texas. More generally, the holiday celebrates the emancipation of enslaved African Americans throughout the former Confederate States of America.  Since that date, 154 years ago, slavery [at least in name] has been largely abolished in the US — until Raniere tried to bring it back – with the old terms – masters and slaves – with him as master and with women only as slaves.

He told his top slave women that slavery was a new form of female empowerment.

In the old days, the government enforced slavery. Now that they don’t do that anymore, Raniere had to enforce his slavery through blackmail and branding.  He called his master-slave organization “DOS.”

And I had the distinct pleasure of announcing its existence to the world, on June 5, 2017, in a story called Branded Slaves and Master Raniere; Sources: Human branding part of Raniere-inspired women’s group.

It was the story that led to the cratering of Nxivm and, four months later, to the publishing of a New York Times story, Inside a Secretive Group Where Women Are Branded, [which credited Frank Report for breaking the story] which led to the DOJ EDNY commencing an investigation into Nxivm which led to Raniere’s arrest.

Yesterday, will be forever known to those involved in Nxivm, and the fight to end its reign of terror, as Vangone Day.  It is fitting that Vangone Day is also Juneteenth.

Yesterday, when the jury found sex slaver Raniere guilty, there was jubilation in the courtroom. Mark Vicente looked as though he was about to cheer the jury.  He said of the verdict, “It’s sort of surreal.”

Judge Nicholas Garaufis commended the jury after their verdict with these fine words:

“Members of the jury, this concludes your jury service. On behalf of the Court I would like to thank you for your professionalism and your attention to this very, very difficult case. You should be very proud of the role you played. You’re excellent citizens. You’ve given a great deal of your time and your energy to this pursuit. And we are honored by your participation in this trial. At this time you are discharged.

And the jurors went away. Moments later Vanguard went away. He was handcuffed and led out of the courtroom – now a slave himself of the state.

Barbara Bouchey arrived moments after the the jury was discharged and Vanguard was gone. She did not get to take a final look at him.

She was weeping when she learned of the verdict – that Keith was convicted on all counts. It’s not clear why she was crying when she heard Keith was guilty and would be gone for years to come – perhaps for all time.

Keith was her former, she thought, mostly monogamous boyfriend [she only knew of him having sex with three other women, she said] and she admitted, time and again, that she was deeply in love with him.  That may have been why she was crying – for now, the man she loved so dearly, was gone forever from her visage.

Or she may have been crying out of sheer relief because he could no longer torment her, which he did for years.

She was in the hallway outside the courtroom and said of her former boyfriend, “There is goodness in him. But there’s this dark side that’s crazy.”

Raniere’s lawyer, Marc Agnifilo was there and told Bouchey, thinking she was pleased by the conviction,  “Congratulations. I hope it helps. I really do.”

Susan Dones did not agree that there was goodness in Raniere. She said, “I think he’s incapable of having goodness.”

Toni Natalie looked emotional but very happy, triumphant really, as she and Catherine Oxenberg walked hand in hand out of the courtroom. Catherine was all smiles.

Outside the courthouse, the US Attorney for the Eastern District of New York, Richard Donahue held a press conference in Cadman Park.  He thanked the FBI, IRS, Homeland Security, New York State Police, his own team of Moira Kim Penza [whose eyes were moist with tears] Mark Lesko and Tanya Hajjar, and bizarrely even the US Attorney’s Office in the Northern District of New York for their help [that was really surreal]. And he thanked the judge and most of all, the jury.

“Keith Raniere’s crime spree has ended and his victims will finally get justice,” US Attorney Donoghue said.

As he walked away from the press conference, everyone – and it is perhaps a little odd – in fact surreal – everyone – including hardened, jaded, hard nosed reporters – erupted into cheering.

Next it was time for the Catherine and Toni show.

The press gathered, the cameras rolling. They asked  Catherine how her daughter India felt about the verdict.

A reporter called Catherine a hero for bringing information to the FBI. Catherine said there were many heroes.

She was asked how India was feeling.

Catherine said, “She was like all the other young women who suffered at the hands of this monster, Keith Raniere. No one is unscathed. But she’s not broken. She’ll be the stronger for it … Today I’d say was the end of a hellish nightmare.”

Toni wore a navy and white striped “jail” blouse to court. She had suspected that this would be the day the jury would reach a verdict.

“I wore this so (Raniere) would know what he would be looking at for the rest of his life,” she said.

Someone asked her about Keith’s prediction made to her some 20 years ago, that “I will see you dead or in prison.”

Toni said, “I’m still alive and he did not win.”

Catherine said there are 1000s of abusive cults and anyone can be susceptible to being indoctrinated.

Toni said that all the people in Keith’s inner circle helped enable his criminal enterprise, adding “No one intends to join a cult.”

It started to rain as the conference continued.

Catherine said she plans to continue to work to keep raising awareness, adding that her book, ‘Captive”, was meant for all family members whose loved ones are in a cult.

As the rain came down the two women walked away.

Recalling that, throughout the trial, Keith scribbled on post-it notes which he constantly handed to his lawyers, before going, Toni turned and said to the media, “Now everyone, be sure to send Keith some post-it notes.”

Here are some photos taken by our correspondent, Dianne Lipson, outside the courthouse after the verdict. 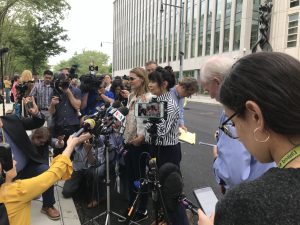 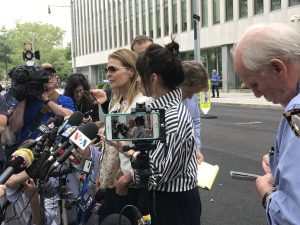