Shadow: The Parallels Between JZ Knight’s Ramtha and Keith Raniere’s Nxivm Are Startling

In General
By Shadow State
It turns out that many of the same kind of people who fell for NXIVM also fell for dangerous cults like Ramtha. Before Mark Vicente became enraptured by NXIVM and Keith Raniere, he was a follower of Ramtha, a cult run by a woman named JZ Knight.  Vicente even filmed a movie about JZ Knight and Ramtha titled, “What the Bleep Do We Know”.
JZ Knight  was born in Roswell, New Mexico in 1946, and lives in Yelm, Washington, just outside of Tacoma and Olympia, Washington in Thurston County. JZ Knight has done well for herself [and Ramtha]. She lives in a mansion on 80 acres.  Unlike Keith Raniere, JZ Knight is not a renunciate.
In her vaudeville style routine, Ms. Knight goes into a trance and transforms herself into a 35,000 year old Lemurian Warrior named Ramtha.  Lemuria is a lost continent located in either the Indian Ocean or the Pacific Ocean depending on which way the wind blows.
Ramtha speaks in a masculine voice with a slightly British accent.  JZ Knight herself has a standard American accent.  To JZ  Knight’s credit, she actually speaks sentences that have nouns, verbs and proper syntax unlike the verbal vomit spewed out of Keith Raniere’s mouth.
Of course Ramtha and JZ Knight’s teachings are still full of crap.
In channeling the spirit of a long dead, 35,000-year Lemurian warrior, JZ Knight is a halfway decent actress.  Better than many of the actresses who infest NXIVM.  Like NXIVM, the Ramtha cult attracts pseudo-intellectual actresses who enjoy pretending to be smart.
Ramtha attracts a better class of stupid actresses than NXIVM. Among JZ Knight’s Hollywood followers are Linda Evans, Shirley Maclaine, and Salma Hayek.  Linda Evans also dabbled for a time in NXIVM.
And JZ Knight has attracted wealthy airhead heiresses to help fund her research into alternate realities. One of Knight’s donors is Rebecca Oppenheimer, heiress to the South African De Beers diamond fortune.  https://www.thenewstribune.com/news/local/article217483200.html
Knight taught Oppenheimer the sport of Blind Archery which is, as the name suggests, practicing archery while blindfolded.
JZ Knight and her Ramtha cult have some significant control of politics of Thurston County, Washington, through massive donations to the county’s Democratic Party, much the same way that the Bronfman-funded NXIVM made large donations to Democratic party candidates in New York State.
“From 2014 through 2016, the Thurston County Democratic Party has raised $526,391 according to their reports with the Public Disclosure Commission.  For contrast and comparison, the Thurston County Republican Party has raised $115,468.  Of the over half million dollars the Thurston Democrats raised, $145,000 of it came directly from racist cult leader JZ Knight/Ramtha.  This was more money than all the cash raised by the local Republicans during that same time.”
https://www.wethegoverned.com/how-democrats-ripped-off-ramtha-and-wasted-donor-money/ 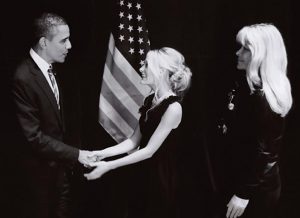 Barack Obama with JZ Knight [Knight’s granddaughter in middle.]
While JZ Knight supports Democrats like Hillary Clinton, her masculine Ramtha alter-ego has endorsed Donald Trump.  [I suppose that’s one of the advantages of having a split personality.]
Like Keith Raniere, JZ Knight sued a woman named Virginia Coverdale it seems to make Coverdale an indentured servant.   A Federal Court rejected JZ Knight’s lawsuit. 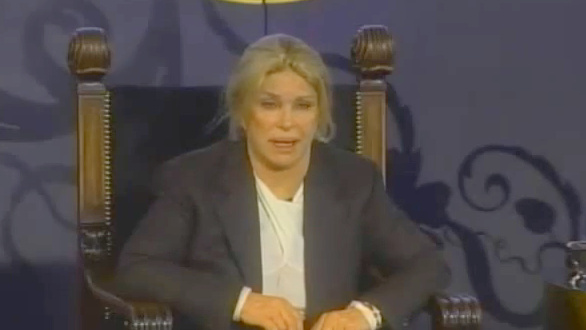 Cult Leader JZ Knight fails in Federal Court
In a January 2018 story in theGoverned.com, we learn, “The nastiest litigation saga by the most litigious cult leader – JZ Knight – finally came to an end last month.  Knight lost her final legal effort in Federal Court to turn former cult member Virginia Coverdale into a perpetual indentured servant.  Federal Judge Brian Lynch wrote in his findings of fact filed December 15th:
“’Overall, this Court’s conclusion is that JZK was intent on suppressing efforts by Coverdale to expose tenets and practices of RSE because it might cause serious damage to its reputation.  JZK attempted to use its superior financial resources to intimidate its dissident ex-students by its lawsuit. Coverdale had the temerity to defend herself in a lawsuit pursued vigorously by J.Z. Knight and JZK.’
“The 31-page court findings of fact and conclusions of law document is a damning rebuke of JZ Knight’s abusive harassment of a former cult member.
“Virginia Coverdale was a former member who left the cult and attempted to warn local government officials and current cult followers about JZ Knight’s racist and bizarre behavior.  JZ Knight initiated aggressive legal action against Coverdale in an attempt to silence her and intimidate other followers from exposing the truth about Knight.
“Coverdale had few resources and sparse legal representation during most of the five-year legal drama.  JZ Knight spent nearly a million dollars to harass Coverdale over the past five years, and it is difficult to prevail in Washington State’s court system with such a disparity of resources.  Eventually, Coverdale was forced into bankruptcy by Knight’s relentless legal harassment.”
The parallels between JZ Knight and Keith Raniere are startling. And what does it say about cults that their leaders behave in remarkably similar ways?
0 Share
Share Tweet
Previous Post Actaeon: Keith Raniere Subscribed to the Old Testament Standard
Next Post Exclusive Video: Emiliano Salinas With Sister Cecilia Salinas Dance and Sing ‘Happy Birthday’ to Nxivm Sex Cult Leader Keith Raniere